Like a West Virginia mountain back road, the Stella and Jonas series is a bumpy ride, twisting every which way, sometimes turning gently, then lurching the reader around a hairpin curve. The path rises and falls with beauty and interesting sights all around, though, and eventually the reader (as well as Stella and Jonas) gets where they’re going. When the ride is done and stomachs settle, the travelers can relax. Then later, perhaps over a glass of cold sweet tea, a niggling doubt surfaces. They begin to wonder, “Is it really over?”

See more details about each book below

Drunk on Peace and Quiet Review

This book is well-written and easy to read. Stella, the heroine, is the personification of an “old-time” mountain woman. Though battered by personal tragedy she does not surrender, but uses it as a catalyst to become a strong, independent woman. Infused with that pioneer spirit, Stella can not only take care of herself, but also those she loves. As we learn more about Stella, we see that she is an intriguing character who definitely knows how to keep a secret.
Gayle Jennings, author of Mama’s Song.

See all reviews at Amazon.com.

Hung over with Grandma Review

You will want to read this story. Enjoyed the travel between Alaska and West Virginia. Also , liked the realism used with Mother in law. While reading this story I chuckled, felt empathy, and was surprised. This story is as well written as the last one and leaves me anxiously awaiting the next. Keep them coming Becky! Amazon review.

See all reviews at Amazon.com.

Title: Drunk on Peace and Quiet

Title: Hung Over with Grandma 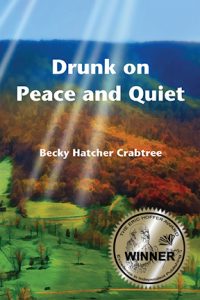 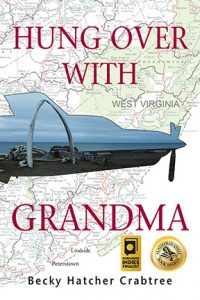 Drunk on Peace and Quiet starts the Stella and Jonas Series. Penelope Ann Davis suffers a childhood of abuse at the hands of her older brother before she runs away on graduation night. She escapes on a bus headed north from her home in Atlanta and ends up on a mountain farm in southern West Virginia. There she establishes a happy, contented life as Stella for the next three decades.

Then, out of the blue, her brother shows up in front of her church and her life starts to unravel: church money goes missing, her best friend is found dead, and a new church member is in desperate financial straits. Her brother discovers her identity and she faces imminent danger.

Underlying the action is wry mountain humor and a tender love story between Stella and an Alaskan Inupiaq man with some mysterious circumstances of his own.

Second in the series of the life of an Appalachian woman, Hung Over with Grandma continues the love story of Stella and Jonas, her Inupiat boyfriend for nearly three decades. It spans the distance from Lindside, a rural community in West Virginia to Atqasuk, a small town in Alaska.

His elderly mother, suffering from the beginnings of dementia, and her brother, committed to a state hospital awaiting trial for murder, create a bumpy road for the new marriage and the lives of Stella and Jonas. When Stella says “I do” to Jonas, she discovers quite the surprise –– a sudden honeymoon takes the newlyweds from the winter cold of West Virginia to the freezing depths of the Arctic night in Barrow, Alaska.

There she is thrust into adventures she never imagined possible. Greater even than facing the journey and the below zero temperatures, the real shock is the culture and the new and remarkable mother-in-law, Mary Jo. Jonas’ mother is sometimes withdrawn and enigmatic and sometimes a mighty force in the lives of Jonas and Stella. The clashes are there, but as Jonas revisits the home country of his youth and Stella finds her way in the complex family relationships, both recognize that even with huge cultural differences between the Arctic and West Virginia there are deeply shared values: love of the outdoors, humor, love and loyalty to family, and even the fun of bingo games.

Circumstances created by the early ravages of dementia bring the newlyweds home with two companions – Mary Jo and her sister Phoebe. These elderly, lively, wildly mischievous, and clever women are immediately more than a handful for Stella and Jonas. They soon become players in the family fight to defend Stella from her brother Timmy Lee, now a fugitive escaped from a psychiatric hospital and hell-bent for deadly revenge on Stella and willing to roll over two old women to get it.

Pick Your Poison builds on the first two novels of the series, Drunk on Peace and Quiet and Hung Over with Grandma, but all the reader really needs to know is Stella and Jonas are middle aged newlyweds who are plagued by Stella’s troubled brother Timmy Lee.

In this sequel, Stella and Jonas face a new obstacle, a huge unwanted natural gas pipeline crossing their mountain farm. At the same time, her brother, a suspected murderer, is pretending to be a preacher at a sunny beach town in South Carolina and is targeting a wealthy woman who lives in a nursing home there. The two plots intersect in a conclusion that features Stella’s usual pragmatic decision-making. She ‘picks her poison’ in a way that the reader may not expect.