CNN [Chicken News Network] Lindside WV: Grandma’s Security camera captured an image Thursday (the night after the murder). It has been sent to a lab in Cordon Bleu, France for analysis, but sources at the security service believe it shows a possum or maybe a muskrat. Although the camera was not operational during the time Wed. night when the murder took place, the next night at nearly 10 PM, a villain returned to the scene – see photo one. If you can identify or have information concerning the whereabouts of this mammal of interest, please contact CNN. As seen in photo 2, the heinous nature of the events in the coop has terrorized two Buff hens as they try to get some shuteye outdoors two nights later – they were too chicken to even enter the coop until counselors arrived. Economy is suffering as the flock is not laying eggs. Stay tuned, tomorrow we may have something to crow about. 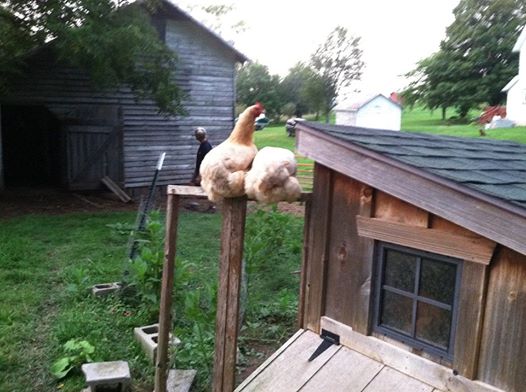