“Oh, Mr. Robertson, You did it! Your book is launched” 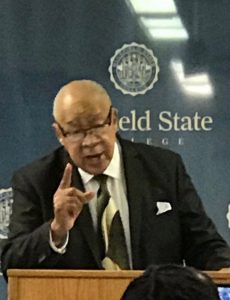 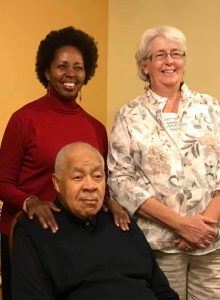 William B. Robertson with daughter Victoria, and Author Becky Crabtree

“Civil rights literature has not always done a good job of showing how the protests of the sixties marked the beginning of the dismantling of state-sanctioned discrimination, not the end. Bill Robertson’s invaluable memoir, on the other hand, chronicles those changes, from the grass roots to the highest government channels.”—Andrew B. Lewis, author of The Shadows of Youth:
The Remarkable Journey of the Civil Rights Generation

Bill Robertson was one of our greatest pioneers and a tireless advocate for racial justice. One of his final acts was the completion of his memoirs. LIFTING EVERY VOICE reveals how the advances made during his lifetime were no foregone conclusion; without the passionate efforts of real people, our present could have been very different.
The survivor of a traumatic childhood in the Green Book South, and the witness to his father’s rage over racial inequity, Robertson rose above an oppressive environment to find a place within the system and, against extreme odds, effect change. He was the first Black man to run for the Virginia General Assembly, and as a teacher, the first to help integrate a white school in Roanoke. He became the first Black decision-maker in any southern governor’s office, appointed by Virginia governor Linwood Holton in 1970. In a state controlled by segregationist Democrats, Holton was the first Republican governor since Reconstruction, and his government was pivotal in its commitment to move the state away from nearly a century of segregationist policies.
Robertson went on to serve five presidents, heading the Peace Corps office in Kenya and later serving as deputy assistant secretary of state for African affairs. As a public servant he worked on both sides of the aisle, in a way almost inconceivable in today’s polarized society, collaborated with the Jaycees to build a camp for children with mental disabilities in Virginia, and eventually focused his support on Black Lives Matter in his eighties—because there is still so far to go.

William B. “Bill” Robertson was a trailblazing educator, activist, and gubernatorial advisor who was a central participant in Virginia’s shift from its segregationist past and who went on to serve in five presidential administrations. Becky Hatcher Crabtree is an author living in West Virginia.