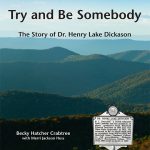 After two years in the making, Dr. Dickason’s biography will be released on Friday, September 29 at Bluefield State’s Founder’s Day.
“The life of Dr. Henry Lake Dickason, first president of Bluefield State College in Bluefield, West Virginia and early leader of Black education, is recognized in this biography. Dickason was born two decades after the Civil War ended and grew up in a log cabin on Peters Mountain near Lindside, West Virginia. He learned
about slavery from his grandparents on both sides of the family.
He learned about the oppression of segregation, especially the limited opportunity for black children to get an education, from the struggles of his own life.
He became a driving force in racial pride and in ensuring that education was available for all those in southern West Virginia who desired to learn.
His life, inspired by his father’s words, ‘Try and be somebody,’ inspires us all.”
It will also be available at the Crafts Fair at BSC on September 30, at Peterstown’s Heritage Day on October 7 and at the Lindside Methodist Church’s Fall Festival on October 21, and as always, by contacting me. ($10.95.) Amazon and BarnesandNoble will also offer the book in the coming days.