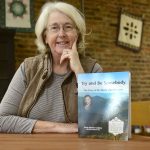 Becky with “Try and Be Somebody.”

I am very grateful for this wonderful article written by Charles Boothe and published Saturday, Dec. 30, 2017.  The interview was delightful and his writing was spot on.

Becky Hatcher Crabtree and her husband rented a house in Monroe County near Lindside many years ago. That brief stay sparked an interest in Dr. Henry Lake Dickason, president of Bluefield State College from 1936 to 1952. The release of the book, entitled ‘Try and Be Somebody: The Story of Dr. Henry Lake Dickason,’ was on Sept. 29 at BSC, scheduled to coincide with Founding Fathers Day at the college.

LINDSIDE — When Becky Hatcher Crabtree and her husband rented a house in Monroe County near Lindside many years ago, she never dreamed that the brief stay there would lead her to write a book.

“I had no idea who had lived in the house,” she said, later learning it had been the home of Dr. Henry Lake Dickason, president of Bluefield State College from 1936 to 1952.

Not only did that spark an interest in Dickason, who presided during an era that saw unprecedented growth and positive change at the college, but it also created a bond of sorts.

“I felt a real affinity toward him,” she said. “I had a little glimpse of his life as a black man, a teacher, a preacher and president … that really peaked my interest.”

The fact he came from a family of slaves and somehow graduated from high school and eventually from Ohio State University during a time when it was difficult for anyone, white or black, to accomplish that also fascinated her.

“So that’s what inspired me at the time,” she said. “I felt he wanted his story told and that kids in this area need to know his story. But I couldn’t do it (tell the story) at that time.”

That’s because Crabtree, a graduate of BSC herself, was on her own journey.

Born and raised in Glenwood and a graduate of Princeton High School, she had three brothers growing up, all of whom played basketball, a sport she learned to love and played herself at PHS.

“They were called the Tigerettes then,” she said, referring to the school’s Tiger mascot.

Oddly enough, though, it was her experience with sports that laid some of the foundation for her sensitivity to discrimination, and one of the reasons she felt a kindred spirit in Dickason.

“I lived for basketball,” she said. “I wanted to play full court … my mom kept saying I needed good sneakers because you have to stop at half court.”

Stopping at half court meant girls were not allowed to play by the same rules as the boys, or the entire court, and Crabtree said that type of discrimination never sat well with her.

“That was a glimpse of how people are judged (based on things like gender and race).” she said.

She experienced another dose of discrimination after she received an associate’s degree from Virginia Intermont College in Bristol, Va. and applied for medical school at West Virginia University.

But she was told to reapply the following year, learning later she was rejected because at the time the university accepted only eight females, but 76 males were allowed in.

Crabtree went to BSC instead and earned a teaching degree, eventually working in McDowell County and at several schools in Mercer County, including at Bluewell and Bramwell as a physical education instructor.

“I started teaching in Bradshaw in 1975,” she said. “I lived in Bluefield and drove over War Mountain. At one time, I thought I was pregnant, but I was actually car sick from the drive to War.”

Crabtree was also a coach and coached the girls basketball team at Oakvale High School before the high school students were moved to PikeView.

“I was all over the place,” she said of her teaching/coaching career.

One of those places included Barrow, Alaska, by way of Guam.

She and her husband Roger, who is also a BSC graduate and teacher, decided to travel overseas to teach for the extra money and the excitement.

They were in Guam for two years when the Alaska opportunity came up.

“We were in Barrow for 17 years,” she said, adding that all three of her daughters graduated from Barrow High School.

She was eventually principal at a school in nearby Atqusak.

Her experience coaching in Alaska inspired her first foray into writing, chronicling her girls basketball team’s loss of a much wanted state championship.

“It’s hard to lose a state championship,” she said. “We were ahead at halftime.”

“That was my first writing effort, in 2009,” she said. The book is called “Alaska Hoops: Tales from the Girls’ Locker Room.”

Other experiences in Alaska once again reminded her of the presence of discrimination.

Since Barrow is north of the Arctic Circle, the native population make up the majority of residents.

“Alaska natives are in good shape with money (natural resources dividends), so that was never an issue,” she said. “But it was very enlightening if a native kid walked onto an airplane. They were treated differently. I absolutely saw discrimination with them (from whites).”

Those examples of discrimination witnessed by Crabtree added up to an appreciation of the value of not judging others.

“Our daughters will never look at somebody and only see the outside of them,” she said.

They also added up to an appreciation of the discrimination faced by blacks in this country, as well as the knowledge that what she had witnessed only scratched the surface of what people like Dickason experienced.

“It was a tiny peek into what their world was like,” she said.

During those years in Alaska, she and her husband maintained their home in Monroe County and visited it every summer.

They finally moved back permanently to their home in 2011, when she started writing two works of fiction, “Drunk on Peace and Quiet” and “Hung Over with Grandma.”

But those memories of living in Dickason’s house and the idea of writing a biography of him stayed in her mind, especially when she learned more and more about him and his accomplishments.

For example, BSC was unaccredited before his tenure as president. That all changed, as well as an expansion of the campus and curriculum.

Dickason was also a steward in the Methodist church and member of many commissions and boards.

“I started on it about two years ago, in 2015,” she said, doing meticulous research with the help of Merri Jackson Hess. That research even included a trip to the National Archives in Washington D.C.

In fact, they created a family tree of Dickason, tracing his family (as well as slave owners) back well into the 1800s.

A pleasant surprise in the research was what was found at the Monroe County Courthouse in Union.

“The Monroe County Courthouse has more records about slaves in this area then the D.C. archives has,” she said, explaining that one of the reasons was the split of Virginia when West Virginia was created in 1863.

“They (Monroe County officials) got the records from Giles County,” she said. “We found so many things. We were amazed. We found the marriage certificate of Dickason’s parents and a handwritten note to give him permission to marry his wife from her guardian since she was 17. It was such a treasure, such a find in Union.”

Crabtree said they also used online ancestry searches and had help from people like Jim Nelson, former communications director at Bluefield State College. Many old photos were discovered and included in the book.

“We met some amazing people doing the research,” she said.

The names, dates and places are as accurate “as we know how to make it,” she added.

Not only did the research pay off, so did her “affinity” for Dickason.

“I had to write what I think he was feeling,’” she said. “I think of a black kid five years old sitting on the porch (of that house).”

Crabtree said it was also interesting to see old issues of the Bluefield Daily Telegraph.

“They had a ‘News of the Colored People” column,” she said. “Dickason was in that regularly. They covered all the things he did. I feel like the black population in Bluefield at that time was ahead of the South in getting things publicized.”

“I couldn’t find it,” she said. “I couldn’t believe they didn’t run an obit. But then I found it, not in the obit archives. It was a big front page story.”

When enough information was gathered, two years had passed, full of countless hours of research and interviews.

“I loved the writing process and hated it in a way when it was done,” she said.

The release of the book, entitled “Try and Be Somebody: The Story of Dr. Henry Lake Dickason,” was on Sept. 29 at BSC, scheduled to coincide with Founding Fathers Day at the college.

Crabtree said one memorable occurrence at the release was an elderly black man stopping by the banner depicting Dickason, picking up his cane and pointing it at the banner, then saying, “That was my president.”

Although she didn’t plan to speak at the event, she was asked to and did.

In a way, she made a similar point as did the man with the cane, telling the audience that she may be white, but “it is my Bluefield State too.”

So many orders for the book were made that day, another printing was requested, and one more since then.

The homeplace of Dickason, the same home that she once lived in, still stands off Rt. 219 near Lindside. It is privately owned now and not open for any type of visitation, she said.

“The current owners built a house behind it, but they left the old house intact.”

However, the birthplace did result in a move to place a historical marker in his honor nearby.

That marker now stands in Lindside, near Wickline Funeral Home.

“The community paid for that marker,” she said. “It cost $1,976 and they donated the money to pay for it. I was real proud of that. That’s the way Monroe County feels about someone from the county (who is accomplished). We are proud to have him from Monroe County.”

Crabtree, who now teaches at James Monroe High School near Lindside, said she is writing another fiction book, but has no plans to do another biography.

She had never wanted to be a writer in the first place, but it was just inside her and happened.

Wanting to tell the story of Dickason was the first spark.

“I think it’s important that his story be told,” she said. “I had no ambition to write, never. But there are stories that need to be told.”

She also thinks Dickason’s story is an inspiration to youth.

“I want kids in the mountains of Southern West Virginia to know they can chase their dreams,” she said. “He sure did, and he had much bigger obstacles to face than any of us will ever have.”

Writing the book helps ensure they and others will have the opportunity to learn about Dickason.

“His story is there, forever,” she said.

Copies of the biography of Dickason and her other books can be purchased on Amazon.com and at Barnes and Noble.

Personalized copies are available by contacting her through email, queenofthegym@hotmail.com.

Crabtree and her husband still reside in Monroe County. Two of their daughters are teachers. Katherine Adkins teaches at Peterstown Middle School and Papi Crabtree at Talcott Elementary.

Daughter Dinah Jankovich is a pharmacist who lives in Traveler’s Rest, S.C.