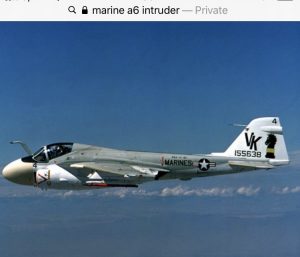 Not a huge mistake, but big enough to correct. Last month, I got an email from Elaine and Bill Jones in Illinois about an event in my book, “Pick Your Poison.” In the story, a plane crash happened in Lindside, WV (and it really did happen back in the 70s). Somehow, I got it in my head that it was an Army plane and that is what I wrote. Mr. Jones, an aviation instructor at Parkland College for over 26 years in addition to being an ex-Marine who was in Squadron 224 stationed in Cherry Point NC where the plane originated, knew that the plane was not an Army plane but a Marine Corps A-6 Intruder plane. As a pilot, Bill also flew these planes. I was SO outranked and underqualified in this area of expertise!

Below is the erroneous quote from the book, the interesting email exchange, and the newspaper articles that confirm Mr. Jones is absolutely correct.

I apologize for my error, applaud his knowledge as well as the kind way the Jones couple pointed out the mistake. I am delighted that Stella and her stories have made it as far as Illinois and that I can interact with such lovely readers via email.

Quote from “Pick Your Poison:”
“You remember hearing about that Army plane that crashed in Lindside in the 1970s?”
“Yeah.”
“You remember that the pilots ejected just before the crash?”
“Yeah.”
“And what did people think when those fly-boys came dragging a parachute behind them, bruised and scratched, knocking on the front door?”
“Well, they didn’t believe them.”
“Why not? There was a burning airplane sticking into the mountain without a sign of a pilot. The men were both in uniform and both said they were pilots.”
“One old farmer was so surprised that he didn’t trust his own eyes.”
“How about the other one?”
“I don’t know why, Stella, but he didn’t believe it either.” Jonas was bewildered.
“How many pipelines have ever gone through here?”
“None, I reckon.”
“That is correct, ‘bout the same number of Army planes that ever crashed in Lindside before the 70s. After that crash it got real, people drug the porch chairs out on the front yard and watched for planes to hit. Now, they knew it could happen. They were ready.” She crossed her arms as if that answered it all.


Email exchange:
Elaine Jones:
“I acquired two of your books at a Political rally in Peterstown WV a couple of years ago through a silent auction! I throughly enjoyed them! My husband recently retired from teaching aviation at Parkland College in Champaign IL for 26 and a half years! He needed something to read so I gave him your books! We just recently ordered your third book! He is also retired from the United States Marine Corps after 21 years! He flew the A-6 Intruder! Upon reading your book Pick Your Poison you alluded to the Army plane that crashed near Lindside, it was not an Army plane, it was a Marine Corps A-6 out of Squadron 533 in Cherry Point, NC! He was in Squadron 224 stationed also in Cherry Point NC! I am originally from Alderson and my mom lived in Lindside!”

Me:
I am blushing in embarrassment as I write. Your husband is exactly right.